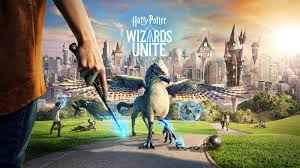 I bet you didn’t know I’m a wizard in my spare time. That’s right — I’m a Level 41 Magizoologist. I can revive my teammates if they get knocked out in fortress battles.

I’ve been playing Harry Potter Wizards Unite (an augmented reality game like Pokemon Go!) since it launched in the United States in June 2019.

I played Pokemon Go for about a minute back when it started several years ago. But the Pokemon universe had no relevance for me.

Harry Potter, on the other hand, has been an intricate part of my world since 2000, when I started listening to the audiobooks while driving my step-children to school. We have a cat named Hedwig, who joined our family the year the “Deathly Hallows” came out.

When this game came out, I was all in. I’m even part of a couple of Facebook groups, including one for players over the age of 40.

Yesterday I noticed someone planted leaping toadstools at the greenhouse by the Mormon church near my house (Peak yield achieved!). I’m currently out, so I set a timer. Toadstools take 24 hours from planting to harvest and they’re a key ingredient in one of the potions wizards brew. So they’re definitely worth setting a timer for.

Today I walked back over there and waited for the harvest. I noticed a car pull into the church parking lot. The harvest popped and I collected the toadstools and started to walk home. A minute later, I noticed the car from the lot pulling up next to me.

“Excuse me, are you playing the wizard game?” asked a woman even older than me. Yep, I replied.

“Were you waiting for those toadstools to finish?” Yes, I was.

“I’m sorry – I got them all,” she said apologetically. But I did too, I told her! That’s how it works. You get them because you planted them, and anyone else who comes by gets them too!

I told her I planted some that will pop around the same time tomorrow morning at the Baptist church next door.

I love running into a fellow wizard in the neighborhood!