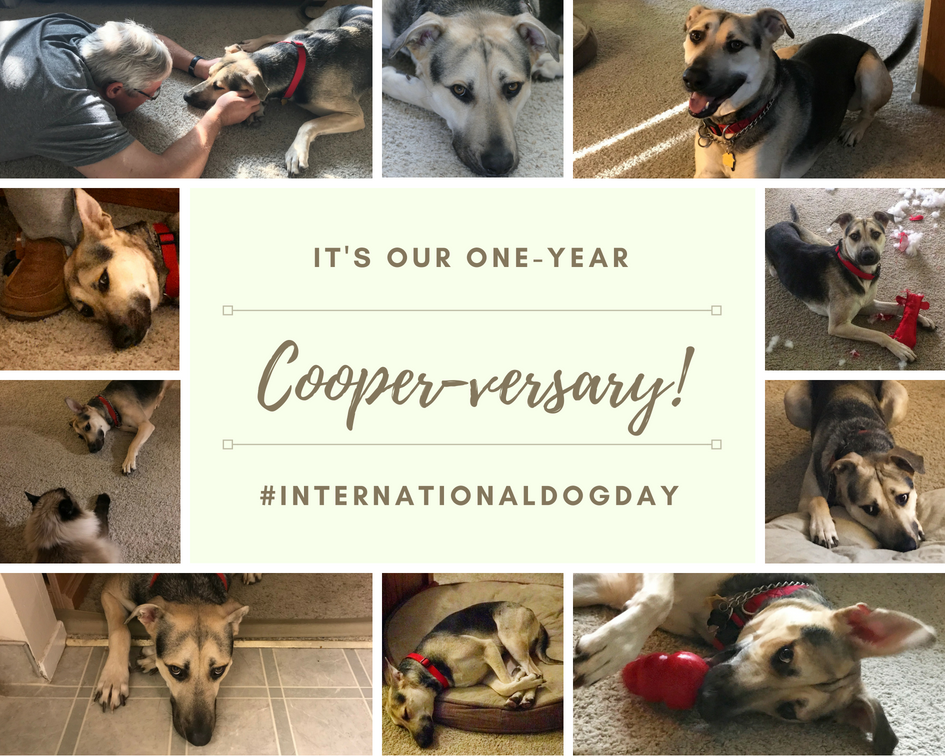 One year ago today, on International Dog Day, we went to Miss Winkle’s Animal Shelter to see if we could find a dog.Our previous dog, Millie, had died more than 2 years earlier, and it felt like it might be time. “A house isn’t a home without pets,” Randy says.

We came home with a shepherd mix that we named Cooper, after the Cooper’s hawks that had been frequenting our backyard.

The shelter told us we were getting a 2-year-old dog, but the vet laughed at that, saying this dog was only 10 months or a year old. A puppy – we had adopted a puppy. A 60-pound puppy with issues.

Cooper had been “in the system” less that two weeks, brought in as a stray. We’ll never know what he went through before he got there, but whatever it was left him with some emotional scars.

Cooper’s issues became apparent as he grew more comfortable with us. The biggest issue was — IS — his extreme anxiousness and reactivity around other dogs. We tried to take him through dog obedience classes, with one of the best trainers in town, but being around other dogs was too much for him.

We can’t walk or run him in the neighborhood for the same reason — he freaks out if we encounter other dogs, even if they’re safely behind the fence in their own yards. So I’ve had to get creative, finding safer, less triggery places where he can run and work out some of his big puppy energy.

But our cat is still alive, showing that Cooper can learn and can modify his behavior. He just requires infinite patience.

He thinks he’s a tiny lap dog. And he leaps like a kangaroo at dinner time. Sometimes he “yells” at me, which sounds like a scolding howl.

But the dog we rescued from the shelter on International Dog Day a year ago has blessed our lives. Happy Cooperversary!